All too soon, it was time to leave Hoi An.  So, we left at around 6am for the Danang airport by private car provided by the hotel.  They had even packed us a nice breakfast to enjoy as we drove.  We got checked in and settled on the hour-long flight to Ho Chi Mihn City.
We landed on time and got ourselves over to the Rex Hotel in District 1 where we would be staying for our time in the city.  HCMC is a much more westernized city with wide boulevards and a dedicated financial district.  As our room was not yet ready, Jon and I went down the street to a coffee bar to indulge our inner Seattlelites over some high-priced iced coffees.  An hour later we returned to get our bags dropped off before hitting the streets. 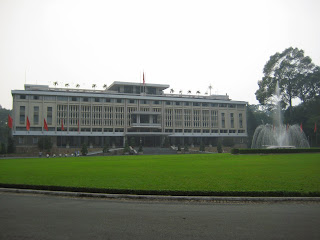 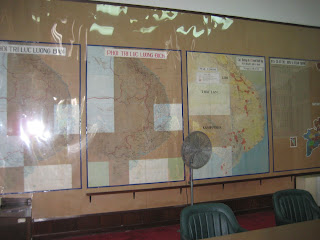 Our first stop was lunch at a fantastic restaurant right in between our hotel and Reunification Palace.  The palace was built, destroyed, and rebuilt several times throughout the years, but its major place in more recent history is that it was the spot in 1975 where Saigon officially fell as tanks from North Vietnam breached its gates.  Our tour guide was quite knowledgeable about the history, and we enjoyed seeing the various rooms (meeting rooms for the country’s leaders with foreign leaders as well as other Vietnamese guests, living quarters, etc.) as we were led up and down the many levels including a fortified bomb shelter underneath.  This was the first time on our trip that we had really been confronted with evidence of the Vietnam War, and it was sobering to think about how different things were in this part of the world than the beautiful country we were feeling so fortunate to visit.  I didn’t exactly feel like I had to apologize for the US, but I was certainly aware of the conflict.
We walked out onto the streets to the even-more-humid streets and made our way over to the Notre Dame Cathedral.  It is notable mostly because the architectural style is unlike anything else we had seen since we landed in Asia.  The cathedral could have been lifted right out of the French countryside and plopped in the middle of a very busy traffic circle!  Of note particularly was the neon blue light surrounding the Virgin Mary.  On our way back to the hotel we booked a tour to the Cu Chi tunnels for the next morning.
That evening, Jon and I walked down to the city’s market where all the vendors were setting up outside stalls and getting ready to sell their wares.  We did some window-shopping but didn’t see anything that caught our fancy.  We grabbed some food on the street and had a quick meal before getting some ice cream on our way back to the hotel.
Posted by R-dogg at 7:02 PM