What a difference a good night’s sleep makes!  It was Thanksgiving in the US, but Hanoi was as busy as any weekday with a vibrant streetscape everywhere we went.  The density of the old quarter means that the sidewalks are taken up by vendors and motorbike parking with very little room left for pedestrians.  We had breakfast at our hotel and took a few minutes to get our bearings.  We quickly realized that due to the restricted hours, visiting the Ho Chi Minh mausoleum would be our first stop. 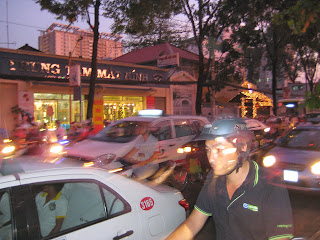 Out of the hotel and on to the street, we waded through the vehicles and into a cab on the far side.  The chaos on the roads is hard to describe, but if you can imagine all manner of vehicles (trucks, buses, cars, motorbikes, and hand carts) all seeking to use every inch of pavement in an effort to move forward, that would be a good start.  Part of me really admires the desire to use the road so efficiently, but the tired American in me longed for lane lines and traffic laws.  Add to that the fact that a delegation from Israel was in town, motorcade and all, and the ride in the cab was quite an experience. 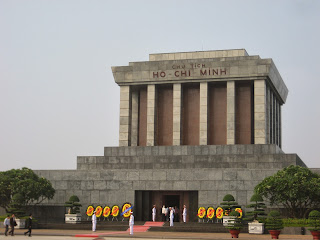 Fairly soon, we had made it to the mausoleum, which is only open for a few hours in the morning 3 or 4 days a week.  We stood in line, went through a metal detector and were then directed to a small window where our cameras and binoculars were seized.  Then, we lined up 2 by 2 to walk into the mausoleum and past the preserved body of Ho Chi Minh.  He is still revered as the great unifier of the country, and all the guards on hand ensure the solemnity of the room.  Interestingly, Ho Chi Minh’s wishes were that he be cremated and that his ashes be divided up between the south, central, and north parts of the country as a show of unity.  Despite their reverence, however, the Vietnamese did not honor this request.  Next door, Ho Chi Minh’s house and office have been turned into a museum, and so we strolled through and admired the lovely grounds and simple furnishings. 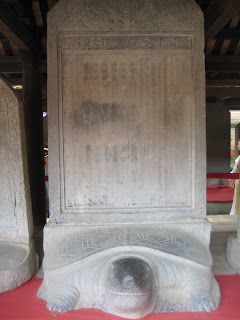 Our next stop was to be Temple of Literature, but a navigation snafu had us walking for a few miles in the wrong direction before giving up and hopping a cab back on track.  As we again passed the mausoleum, we realized that we had gone the wrong direction from the very beginning!  The cabdriver, much better at navigating these streets, got us safely to the temple.  Inside there are markers for all of the Vietnamese that have passed the very difficult national exam.  There were a few courtyards to explore as a brief respite from the crowded streets outside.
Ready for lunch, we located ourselves on the map and headed for a restaurant that had been recommended in the old quarter.  Each street is named after the product that used to be sold along it when this was a market town (bamboo street, rubber street, etc.), which is great, except it means that each street changes names at every intersection!  Still, we found our way to a place that served Bun Bo (noodles with beef).  That seems to be the only thing they make, and they do it well!  We sat on the upper level and watched as the assembly line was set in motion: each person added one ingredient until the dish was completed and whisked off by a server to a waiting starving patron. 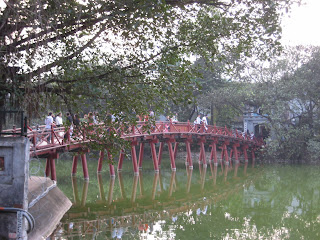 In the afternoon, we hit the streets again to explore the old quarter.  We took a little walking tour suggested by our guidebook and made it all the way to the only remaining city gate before doubling back to the lake in the middle of the city.  In the evening, we went to a restaurant that was famous for its one dish: fish cooked tableside in a pot of oil with fresh herbs, peanuts, and noodles.  We grabbed some ice cream afterwards to counter the warm evening before wandering back to our hotel.
Posted by R-dogg at 6:40 PM