After having a taste of Hanoi, it was time to head out to Halong Bay for our one-night cruise on a junk named the Dragon’s Pearl.  The shuttle bus picked us up shortly after 8 where we rode with a Malaysian family out to the coast.  Along the way, we learned that the crazy traffic was not just confined to the city and continued on the rural roads as well!  We even witnessed a traffic accident (looked like a minor rear-ending) as we made our way through the lush countryside.
The trip was only supposed to take 2.5 hours, but it took us nearly 4 to reach the new suspension bridge that took us out to Halong Bay city where we met up with the rest of our adventurers.
Here's a video of the sort of scenery we were in for:

Including us, there would be 18 guests on the boat: the 6 Malaysians, 2 people from Australia, 2 from Germany, 2 from France, 2 from China, 1 of unknown origin (I never heard him speak), and 1 brash lady from Scotland who we nicknamed Mary (Queen of Scots, you see).  We boarded the junk and immediately sat down to lunch on the stern of the boat.  It was at least 7 courses and included many fresh seafood items.  Jon and I sat across from the French couple who didn’t speak much English.  I tried to translate a few things for them and even engaged them in a little French conversation about on the level of a second-grader (“My name is Rob, what is your name?”,  “We are from the United States, where are you from?”, “Where is the library?”, etc.). 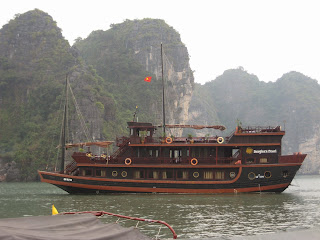 That afternoon, we disembarked on a small island where we toured some caves that had once been inhabited by 2 fishing families who now reside on a nearby floating village.  The cave formations were very nice, and then we had some time to enjoy the beach.  I opted to go kayaking with some of the other folks from our boat while Jon took in the beach and checked out all the boats parked nearby. 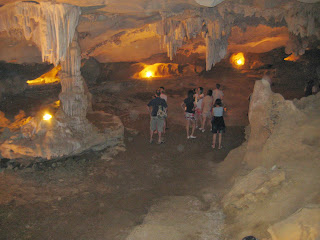 We relaxed the rest of the day, checking out all the rock formations as the boat motored around.  We had dinner in the dining room of the boat (again, many courses and again, fantastic) before doing a little reading from the upper deck as night fell.  We turned in early to our stateroom.
Posted by R-dogg at 6:44 PM