Vietnam: Day 4 - Halong Bay and on to Hue

This morning, we got to an early start relaxing on the boat.  We had parked overnight but were now moving again towards our next destination.  Jon and I had breakfast with our new friends the French couple before we all disembarked to visit a local floating village of fishermen. 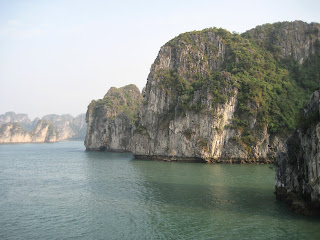 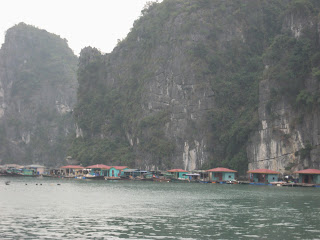 From the Dragon’s Pearl, we were transferred to bamboo boats as women from the village took us around.  All of the houseboats were clustered but didn’t all seem to be connected.  Apparently 300 families live there!  Eventually, we checked out the town hall and school before heading over to the oyster farm where one of the locals demonstrated the process of extracting a pearl and all the different sizes they find.  After that, it was back to the boat for lunch before making landfall back at Halong Bay city in the early afternoon.
Another 4-hour shuttle ride took us back to the hotel.  We didn’t witness any traffic accidents this time around, but the trip along the bumpy roads was certainly a challenge.  Still, we were in high spirits as we left our bags at the hotel and ventured out to find the bahn mi doner kebab (which is a nice way of tying together last year’s Turkey adventure with this one!).  Shuffling through the crowded old quarter, we spotted a stand near the backpacker area and loaded up our small bags with sandwiches for the flight to Hue.
Our taxi ride to the airport brought us into a huge traffic jam that took about 40 minutes to get through.  Luckily, we had left enough time before our flight that we still arrived with about an hour to spare.  After breezing through the domestic check-in process, we soon joined a plane almost exclusively filled with tourists to Hue (only about an hour long flight).
Rain was falling in central Vietnam when we emerged and snagged a taxi to Pilgrimage Village, our hotel for the next two nights.  The only disadvantage to this place was that it was outside the city, but we soon forgot all about that as we saw the beautiful grounds.  It truly was an oasis in the midst of the active streets outside, and we soon settled into our giant room with our own private balcony overlooking one of the swimming pools.  After a long day of traveling from junk to shuttle to taxi to plane to another taxi, a good night’s rest was in order!
Posted by R-dogg at 6:54 PM

You can even randomly assign jobs to teams 카지노사이트 or individuals. This is a great substitute for finding out with flash playing cards, and since the that} topics shuffle, everybody stays on their toes. Create a more participating experience in your website by peppering in an embedded wheel or two.