Jon’s birthday got off to a great start as we slept in a bit before enjoying a nice breakfast at the hotel.  We took the free shuttle provided to the main tourist area from which we’d start our exploring of Hue.  One of our objectives for the day was to square away our travel arrangements to Hoi An for the next morning, so our first stop after crossing the Perfume River was the bus station.  We found out cost of the bus ticket and decided to compare that to the train fare later on. 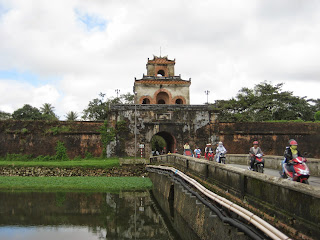 We were planning to explore the ancient citadel that sits in the middle of the old walled city, so our next task was to figure out how to penetrate the outer city walls!  Eventually we came to a gate that took us in, but then we got some misdirection from some cyclocab drivers who sent us all along the outer edge of the wall and up to the north side of the citadel.  What we didn’t know until we got there after walking in the humid and hot weather was that the ticket office is actually on the south end.  Hot but not undeterred, we walked around the city walls back to the ticket office and finally entered the citadel. 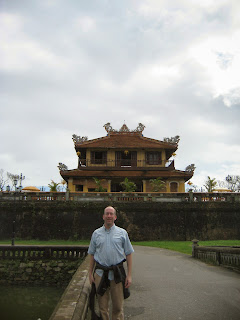 This was the place where the imperial family of Vietnam lived back when Hue was the capital of the country, so there were many lavish buildings that have been restored with fresh coats of paint.  The guidebook described the site as kitschy, but I appreciated the way the vibrant colors brought the area back to life a bit.  Some of the buildings are in ruins, but others are quite well restored.  The interesting to me was that the grounds are not tended to such that plants grow over the walkways and courtyards.
After lunch where we enjoyed a crispy pancake (a Hue specialty), we began walking over to the rail station.  By the time we got there, we were hot and in need of a rest!  The train schedule would allow for us to get to Hoi An at a convenient time, but we would only be able to get as far as Danang before having to then arrange transportation from there to Hoi An.  The bus was cheaper and would take us all the way to Hoi An, so we decided to go with that option instead. 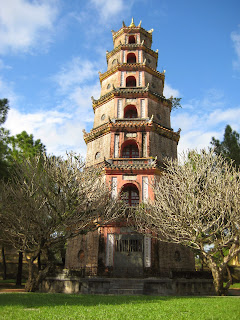 Refreshed from our rest at the train station, we hopped a taxi to the Thien Mu Pagoda a few kilometers from the city center.  This was a beautiful seven-layered structure overlooking a bend in the Perfume River and was a very peaceful place to stroll the grounds.  We saw a few monks tending to some of the bushes as we walked all the way to the back of the garden.  It had been a long day trudging around in the warm weather, so we hired a boat to take us back to our rendezvous point with our return shuttle.  The boat was operated by a husband and wife team who got us downriver as we watched the city fly by.
After purchasing bus tickets, we enjoyed some ice cream at a bar before heading back to Pilgrimage Village.  Jon took the opportunity to get some reading down out on the verandah while I opted for a spot in the air-conditioned room to relax a bit.  We had a nice drink at the bar down by the pool and then had a fantastic dinner at the hotel’s restaurant!  I got a noodle dish that was one of the best I had during our stay in Vietnam, and Jon’s beef dish got good reviews as well.
We wound up heading back to our room and later ordering some chocolate mousse for dessert from room service.  We packed a lot in to our time in Hue and really took advantage of the historical sites around the place.
Posted by R-dogg at 6:56 PM