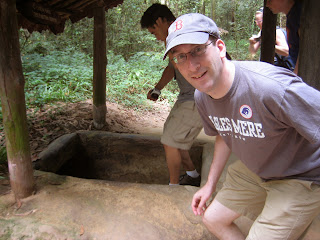 If yesterday’s trip to Reunification Palace had been a gentile reminder of the Vietnam War, our excursion to the Cu Chi tunnels north of the city would bring it front and center!  Around 8am, our tour bus picked us up at the hotel and took a group of us about an hour outside the city to the Cu Chi region.  Our tour guide spoke excellent English and brought a dry sense of humor to what turned out to be a very sobering visit.  The Cu Chi people were in a disputed region that was the main northwest entrance to Saigon during the war, and the people of this area built a network of 250 km of tunnels to live in and to keep them safe from attack.  The US troops tried to poison and drown the folks out of the tunnels, as well as carpet-bombing the area, but to no avail.  Instead, both sides devised traps for their enemies: the US in the form of mines and bombs, and the Cu Chi with more primitive tools such as spears and traps laid out around the tunnel entrances.  The tunnels are impressive in their engineering and still exist to this day.  We even got to go down in one of them, but they are not built for tall Westerners.  This meant a lot of crouching and crawling to get through.
This particular tour made me a bit uncomfortable, but mostly because it really brought to life the brutal fighting that went on from both sides during the conflict.  Add to that the fact that there is a shooting range for tourists to enjoy right there filling the air with sporadic gunfire, and the place really came to life for me.  The exhibits are well-done, and the tour was (I thought) fairly even-handed in its retelling of events.  Jon asked the tour guide what the Vietnamese think of Americans today, and he said that the Vietnamese do not forget what happened, but that they do set it aside and look forward to a more harmonious future. 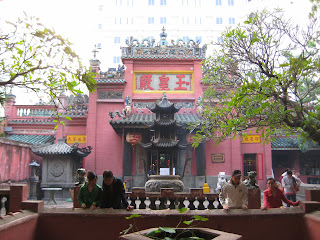 In the afternoon, we got back to the city and returned to the same restaurant where we’d had lunch the day before and had a little time to rest back at the hotel.  Then, we set out on a very long walk through the city to the Emperor Jade Pagoda in District 3.  This lovely shrine is still active today and filled with the scent of incense and filled with worshippers.  A pond in the courtyard out front is filled with turtles that visitors can add some baby turtles to for good luck.  As the evening fell, we sat in a local park to watch the residents play badminton while some children played in a small pool or rode some smaller rides.
Then we walked over to a Chinese-inspired restaurant for dinner where many dishes are served in clay pots.  Jon ordered something called broken rice where the clay pot in which the rice is cooked is shattered.  Then, the rice cake is thrown across the restaurant to a waiting employee who tosses it up in the air several times before serving it.  It was quite a spectacle!  With evening upon us, we wandered back to the market to buy some souvenirs before calling it a night.
Overall, I really appreciated our trip to Vietnam; it’s a beautiful place with friendly people, and I feel fortunate to have visited.
Posted by R-dogg at 7:03 PM