We bid a fond farewell to Pilgrimage Village and grabbed a cab back to town where we were to meet our bus to Hoi An.  The low price of the ticket had us curious as to what kind of trip it would be, but we were game for anything.  So, a very comfortable pink bus pulled up and as we started walking off to get on board, the tourism office attendant pointed us instead towards a small waiting van.  Would this be our transportation?  It seemed comfortable enough and not a bad place to spend a few hours.
Alas, after picking up 4 other people, this van dumped us out at a backpacker hotel only 5 blocks from where we had started.  So far, we hadn’t made much progress.  Eventually a large bus pulled up and divulged some disoriented travelers onto the streets of Hue.  To replace them, we put our big bags underneath and climbed on board.  The bus was air-conditioned, which was great, but it was also comprised entirely of bunk beds.  There wasn’t too much space when we got on board, so we snagged two bunks next to each other on the back platform, which was 5 bunks across.  We hoisted ourselves into position and settled in for our ride over the mountains.
The trip wasn’t as uncomfortable as I had originally thought it was going to be.  Once you found a comfortable position and got used to the weight of the seat in front pushing down on your feet, you could enjoy the ride.  We found out from our fellow passengers that some of them had been riding the bus all the way from Hanoi (about a 17 hour journey), so we counted ourselves lucky that we would only be with them for a short time.  The bus passes through the newly constructed tunnel and misses the picturesque mountain pass of the old road, but as we zipped along the coast and through some of the hills, we got some decent views. 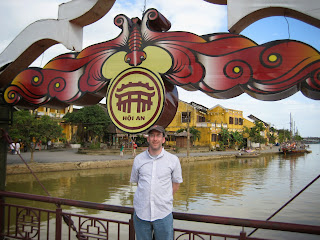 About 3.5 hours later, we were in Hoi An, and what a relaxing place it turned out to be!  Our hotel was a short walk from the bus station, so we checked in there and explored the town.  At the center is the large marketplace with fresh produce, herbs, meat, and fish are sold daily.  It was pretty busy, even around lunchtime, and we took in all the sights and smells as we sought out a recommended restaurant.  There, I had another fantastic pork soup!
Our stroll after lunch took us past some of the town’s attractions: a Japanese covered bridge, some Chinese-inspired temples, and a bridge over the river to the more serene south bank.  Jon had been insisting since leaving the boat that we’d run into some of those same tourists again during our travels, and I had insisted that this was not going to happen since the country was so large.  However, sure enough, we ran into Mary from the cruise on the streets of Hoi An!  We spoke for a bit before parting ways. 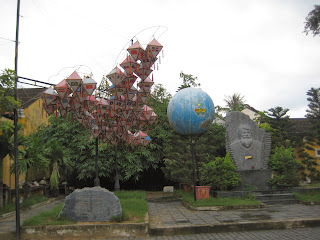 Back at the hotel, we used the Slingbox to catch the latest episode of The Amazing Race and headed back out for a nice dinner.  This was a little pricey but very good, and I thought it was fun to spend a million (VND) in one place!  The town was alive that night with dancing, music, and many tourists as we took it all in on our way back to the Ha An hotel.
Posted by R-dogg at 6:59 PM