Most of the day was spent in transit for us: it all started before the sun came up when we set out on foot to the Fethiye bus station. Realizing that no vans would be coming by, we caved and grabbed a taxi to the bus station where we met our shuttle bus to the Dalaman airport. The bus was by no means full, but I was kind of surprised how many people were headed out that early in the morning.

We got to the Dalaman airport, checked in and boarded our hour-long flight back to Istanbul. We had a little time there to cool our heels before we got on our plane to Kayseri. We left a bit late but still got to Kayseri before dark. I had imagined that Kayseri would be a pretty small place, so I was quite shocked when we landed in a city of about 900,000 people! Surrounded by gorgeous mountains, we got off the plane and grabbed a taxi to the bus station. I initially balked at the relatively high taxi fare, but the driver used a meter and had been pretty accurate in his estimate of the cost.

Catching a bus to Urgup was simple, but we had to sit with our bags on the nearly full bus, so it was a bit more cramped than I would have liked. Still, we drove off into the hills as the sun set and our arrival in Urgup was uneventful. We had to do a bit of searching for our hotel, but some helpful locals guided us in the right direction. Our room was nothing special but was comfortable and gave us a place to relax. As was becoming a theme, we turned in early since our 4:30am wake-up time was fast approaching! 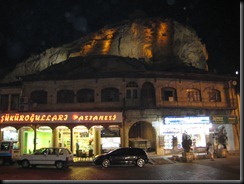 For serious, when are y'all gonna be on TAR??