We woke up well rested from our night in the cave and had a great breakfast at the hotel. Afterwards we asked the hotel owner for advice, and she offered to help us arrange transportation for the day's activities. We wanted to visit one of the local underground cities, and she checked to make sure neither of us were claustrophobic. We confirmed that we weren't, and then she confessed to some claustrophobia herself! Kind of strange since she runs a hotel in a cave! 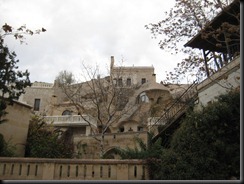 In the meantime, she suggested we ride some of the hotel's horses around the village. Initially, I was a bit nervous about it given the hilly terrain, but Jon was enthusiastic and we decided to go for it.

I am so glad we did! One of the staff helped us on the horses and led us through the little valley and up a steep hill. The horses were gentle, and the view of the surrounding area was gorgeous! 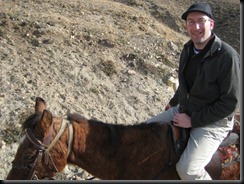 Eventually we descended back to the village where we greeted most of the town residents who were hanging out in the town square. No doubt they had a good laugh at us parading by, but they all smiled and waved as we went by.

Next, our driver for the day took us to the underground city. This was a place of refuge from rival military forces for residents, and the collection of tunnels was just amazing. 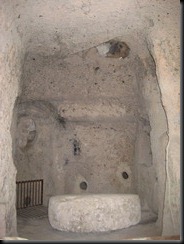 Only 4 levels are open to the public, but there are certainly many more judging by the ventilation shaft we passed! We scraped our heads a few times and dodged some tour groups but were ultimately glad to have had the opportunity to see such an interesting settlement.

Our driver then took us back to Urgup and despite his lack of English and our poor Turkish, got us squared away with bus tickets. He was truly quite helpful. We had a nice lunch before the hour-long bus ride back to Kayseri. 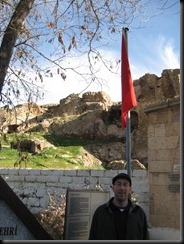 There, we grabbed a city bus towards our hotel. I knew we would eventually encounter the tram line into downtown, so we kept our eyes open and hopped off at the tram station. We hopped the tram and got off at the stop for our hotel, as provided by a nice security guard. Then, yet another nice guy on the street took us to a taxi stand. A taxi driver here set us off towards our hotel. As usual, I am deeply indebted to the kind folks we encounter who take the time to help two tourists!

Finally at our hotel, we rested before venturing out for dinner. I was surprised in a city of that size how few English speakers we found, but folks are patient and usually happy to encounter somebody from another country.

Packed and ready for the journey home, we turned in at the Hotel Ibis.