For Jon's birthday, and to continue our theme of trying out a new form of transportation on every trip, we got up early and were ready to go at 5:30am for our hot air balloon trip! The company came and picked us up and shuttled us to the launch site, about 7 miles outside of Urgup. There, we met up with what seemed like all the other tourists in the area who were just as eager as we were to get up in the air.

I was a bit anxious about the trip because of the height, but the large basket on our 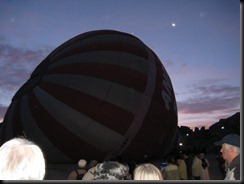 balloon held about 24 folks, so I was able to stand to the inside. As we enjoyed some tea, we watched as about 25 balloons were unrolled and filled with hot air. We launch just as the sun was rising over the hills giving us a great, clear view of the landscape. Up, up, and away!

Our balloon pilot was British and explained to us how to remain safe on board, and then we were off! This was our first view of the rock formations that Cappadocia is known for, and what an introduction! They were similar to what we'd seen in Bryce Canyon and Zion in Utah but were smoother and fanned out in all directions. Despite the occasional bursts of hot air, it was an extremely peaceful trip across a valley, over a large hill and out over some fields. The ride lasted about 90 minutes, but I think I could have stayed up there for hours.

The landing was a bit rough but safe, and it was followed by a quick glass of champagne. Jon and I had a chance to talk a bit with the pilot who had been flying for 23 years. He also recommended a hot air balloon flight in Kenya should we ever find ourselves there. Possible future trip idea?

Back at our hotel, we enjoyed a nice breakfast and then made our to the bus station where we grabbed a bus to the Goreme open-air museum. 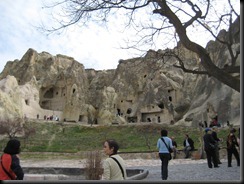 This was an ancient monastery and nunnery build directly into the caves of the region and was quite a sight. I was impressed by the extensive networks of buildings that had been created and the ornate decorations in the many churches and chapels there. It was a bit cool but quite pleasant, so we didn't mind waiting a bit for our bus back to Urgup where we collected our bags and took a taxi to our next destination.

Jon had featured the Giramisu Cave Hotel in a slide show a while back, but both of us were blown away by the place. Situated away from all the tourist stops in the region, it was a very peaceful place built right into the caves. Our well-appointed (and huge) room had a nice skylight and a working fireplace. Once settled, we took the opportunity to explore the grounds and the surrounding village of Ayvali.

We had dinner in the gorgeous dining room at the hotel, and the 4-course meal was absolutely excellent! A tour group was also staying at the hotel, but they cleared out early giving us the entire run of the dining room to enjoy our leisurely meal. Later on, we went back to our room and attempted to start a fire in the fireplace. After several attempts with the provided matches, we called the front desk which sent somebody down with a propane tank and torch to really get the blaze going! Why hadn't we thought of that? Exhausted, we bid farewell to a great day and got some rest.

Um, propane tank? Well, that's one way to do it!