Ecuador: Day 6 – On the Road Again

After another leisurely breakfast at the hacienda with the same crowd we'd shared dinner with the night before, Jon and I had to get started back towards Quito. We strolled around the grounds a bit with some of the local dogs, trying to put off our inevitable return to the big city. 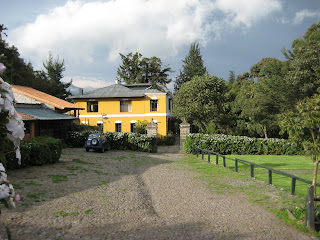 With no more time to dawdle, Paty drove us back to the side of the highway pointed north to Quito. I had assumed that we'd take a bus back to the southern bus terminal and then perhaps a cab from there to our hotel. As we were leaving, though, Gabriel told us to grab a green bus to a shopping center and then hit the trolley bus into town. I was apprehensive since we had our bags, but we weren't on any particular schedule until our flight the next morning, so it was worth a shot.

The first bus was very comfortable and eventually arrived to the mall that we were looking for it. "You can't miss it," insisted Paty, and sure enough, we got our bearings as soon as we saw the mall approaching. Another 25 cents later, we had entered the metrobus system from yet another point.

Surprisingly, this station had a trolley bus "map" of sorts that listed some of the stops we'd see. Joining the giant crowd surging towards each trolley bus that arrived swallowing what seemed like zillions of passengers, I was relieved when we scored some of the coveted seats on the bus, our bags securely in our laps. The bus only got more crowded as we zipped into central Quito. I'd figured out the grid address system of the city by this point, so I could keep track of our progress as we passed each stop. Finally, one stop before we were to get off, we started to make our way towards the entry/exit door. As the doors opened, Jon was able to push his way off the bus, but I was trapped on, unwilling to use my backpack (now strapped in front) as the battering ram that would have been necessary to exit as well. I wasn't too concerned: the north side of the new city was familiar to both of us by now, so I figured I'd just get off at the next station and walk back south. Luckily, the very nice folks on the bus saw my plight and stepped aside to hold the doors open as I jumped off shouting "GRACIAS!", grateful for their kindness towards the hapless tourist. I made a mental note to offer similar assistance to the next confused passenger I see on a bus in Seattle.

We walked the few blocks to our hotel, Cafe Cultura, and got rid of our bags. Now on foot and much lighter, we walked back through the central park to the old city again. We did some looking around at the secondhand electronics shops for Jon's iPhone to no avail. The only one we did see was in the hands of a policeman, but he did not seem to think the one he had belonged to Jon. We ducked into an Internet cafe to get the latest from the outside world, and an hour later a large hailstorm had begun in Quito. We tried to wait it out for a little bit, but there seemed to be no change in the intensity. The clouds reduced the visibility which kind of cancelled our plans to take a cable car to the mountaintop. So, we grabbed a cab back to our hotel. It was a slow trip as most of the streets were flooded by all the rain. Somehow, our cab made it back north, and we did some reading until the evening brought some relief from the rain.

Again on foot, we checked out the area around our hotel and then headed back to the old city for some local fried chicken. The place we ended up seemed similar to a KFC, but the fried chicken is supposedly a local street food favorite. Our meals came with a helpful plastic glove for picking up the greasy chicken, in addition to the usual knife and fork. Another cab ride took us back to our hotel where we did some reading in the cozy lobby and turned in early. The next day would bring an early departure to the islands!