Our usual wake-up announcement came from Ruth, the cruise's "Julie McCoy", at 6:30am. This is probably as good a time as any to talk about life on the boat. Everything that will happen for the day is spelled out rather clearly in a schedule provided the day before. Every activity has a specific start- and end-time, and there are announcements 15 minutes before anything major happens. As you might imagine, anything with a set schedule appeals to me, so adjusting to life on the boat wasn't all that difficult. Every day there'd be a buffet breakfast, then an excursion for the morning, followed by a buffet lunch back on board before another excursion out to one of the island. After that, there would be a happy hour followed by dinner. So there's a fair amount of time to socialize with the other guests on board.

We were placed into four different groups for the excursions: the albatrosses, the boobies, the cormorants, and the dolphins. Jon and I were part of the albatross group, and we really enjoyed the group we were in. The British folks were in the booby group, and then the cormorants were a group of tourists from all over the US. The dolphins spoke Spanish, so it was a little harder to get to know them. I'm terrible with names, so Jon and I came up with nicknames for the other travelers to help us identify them. One mother and two-daughter group were from the Boston area, so we called them "Bean Town" and had a great time getting to know them over the course of the cruise. I think we lucked out in that everybody on the cruise with us seemed like such nice folks!

This morning's outing was to Punta Suarez on Espanola Island. Our naturalist for our walk was Hernan, and his English was excellent. We landed on a beach with the standard assortment of sea lions frolicking in the water. 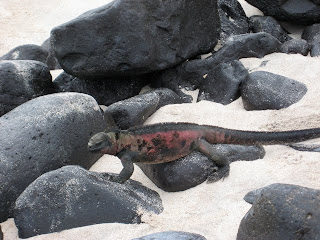 Also hanging out on the beach were a group of marine iguanas, so-named because they like to head out into the water to feed on algae. There were so many of them that we had to watch our step so as not to accidentally trample one of them! Hernan explained to us a bit about the island and what we would see on our nature walk. Here, we encountered our first Blue-footed Booby! 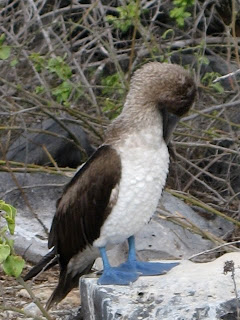 They really are beautiful birds. The younger ones actually have white feet, but as they mature their feet turn the bright blue color often seen in photographs. Also hanging out on this island were Nazca boobies 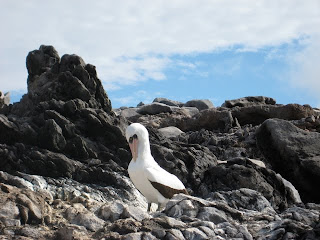 with what looks like a masked face. We saw a few of them performing their mating ritual by pecking at each other's beaks. The main attraction of this side of the island was an albatross colony. 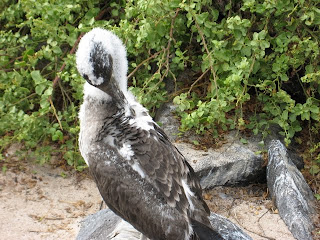 Many of the albatrosses had already migrated away from the island (as they do from December to April), but we did get to see a few of them still hanging around.

In the afternoon on the boat, we got a lecture from Billy, the head naturalist, about reptiles in the Galapagos. Our afternoon excursion took us to Gardner Beach on the other side of Espanola Island. It was a beautiful, white, coral sand beach with a colony of sea lions hanging out. 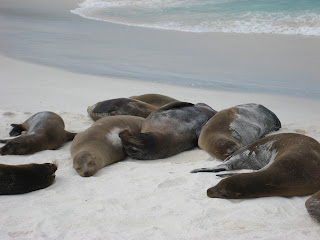 Our naturalist explained to us a little about their living arrangements.

That night, Jon and I were the only English-speakers to join in the karaoke activity after dinner. Always the good sport, Jon sang "New York, New York" in Spanish, much to the delight of the other folks in the room. We sang along to a few of the Spanish songs before calling it a night. 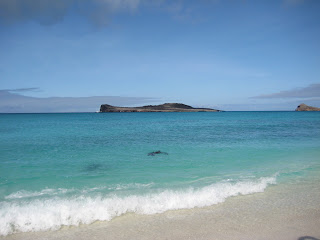