Ecuador: Day 7 – Come aboard, we’ve been waiting for you!

Rolling out of bed and eager to start the next phase of our trip, we took a cab to the national departures area of the airport. Our flight that morning would leave Quito, make a stop in Guayaquil on the coast, and then continue on to San Cristobal in the Galapagos Islands. We met up with our cruise representative at the Quito airport who gave us all the documents and instructions we'd need to hop on to our cruise ship, the Galapagos Explorer II.

The flights were very comfortable, and we had room to spread out on both legs. San Christobal was more inhabited than I had expected it to be, with about 8,000 full-time residents. We hopped off the plane, paid our entrance fee into the national park and met up with our GEII reps quickly and efficiently. 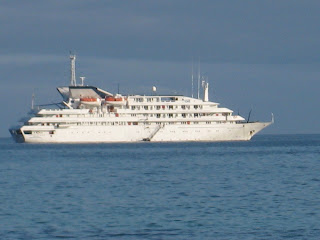 Once we were all corralled, a bus took us to the waterfront where we walked to the town pier. From there, we were taken by Zodiac out to the ship (the largest one floating in the crowded harbor). I didn't really know what to expect, but the ship was much more beautiful and comfortable that I had imagined. We boarded, checked in, unpacked in our cabin and looked over the schedule for the day.

The first stop on our trip was on the other side of San Christobal Island at a beach called Wizard Hill. 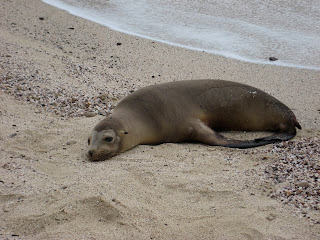 Wizard Hill is a large volcanic rock formation, and over time its erosion created a green sand beach. The waves were too high for any good snorkeling, so all of us set off for a walk down the nice beach. Jon and I were amazed at how close we were able to get to the sea lions who were taking a nap on the beach! It was quite incredible to see.

Sea lions live in colonies, so there was an alpha male patrolling the area and barking while the rest of the sea lions stayed in the sand. Looking around, it was hard to believe that we were in such a beautiful place. 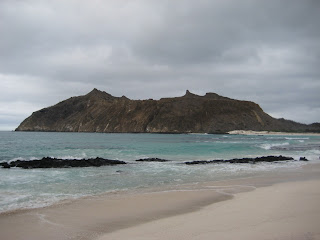 Back on board the ship, we dressed for dinner and had a nice meal in the dining room. Earlier in that day, one of our British fellow cruise guests had told us we'd be "plum knackered" by the end of the day, and she was right! We both slept soundly.

The Galapagos Islands are the most incredible living museum of evolutionary changes, with a huge variety of exotic species (birds, land and sea animals, plants) and landscapes not seen anywhere else.