This morning, the boat let us off in Puerto Ayora to visit the Darwin Center. This is where most of the giant tortoises on the island hang out. As they are endangered, scientists have brought the tortoises here to mate and hatch the next generation. 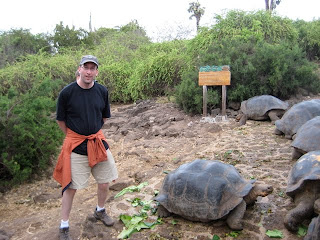 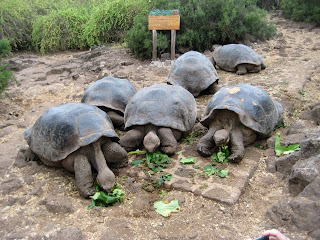 After a few years in captivity, they are then returned to the same island where their parents had been found. It was unbelievable to get right up next to these creatures as they were eating their lunch. They are quite interesting, and I enjoyed seeing the adaptations of some of the tortoises to various environments. For instance, one species from an island with ground vegetation might have a shorter neck than one from an island with more trees. 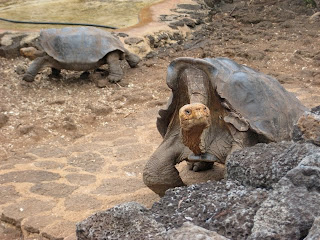 Probably the most famous of the tortoises at the Darwin Center is Lonesome George. 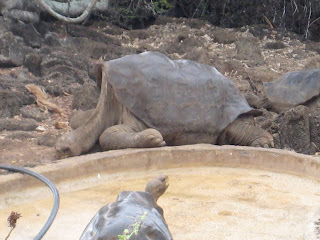 He's the last one of his species, and scientists have yet to find a female for him to mate with. He was hiding in his habitat when we first went by, but he came out a little later in the day so we were able to snap a photo of him.

Back on the ship in the afternoon, Jon and I took a class in towel folding. We learned how to create various birds and other animals out of towels from the helpful housekeeping staff. 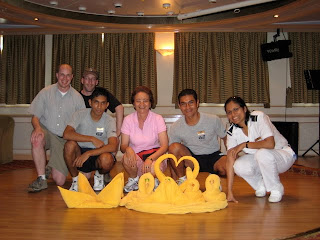 I think it's safe to say that I was not cut out for a career in towel-folding, but we had a good time anyway!

The afternoon excursion was to the island of Radina. The entire island here is red because of the type of rock that makes up its mountains. The red sand beach with, of course, more cute sea lions was a relaxing place to spend the afternoon. After seeing all the other amazing sites of the island, however, I must say that Radina paled in comparison. 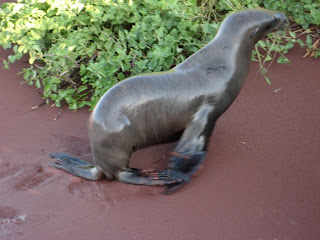 After dinner in the dining room, we all went up to the bar for a drink. We split up into teams for a trivia competition. My team tied with Jon's team, but alas, his group got the tiebreaker question correct. Their reward was a couple of bottles of wine, which they nicely shared with everybody. On the side of the boat, we saw a few sharks, dolphins, and sea lions swimming around. It was neat to see but very difficult to photograph. 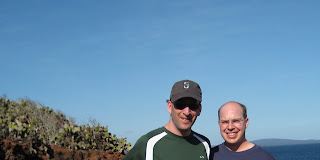