We woke up and met up with Gabriel around 8am for breakfast. It was to be quite an eventful day at the Hacienda. The first visit was from Chris and Abe, two folks who were visiting, coincidentally, from Index, WA. We learned over breakfast that Chris was there advocating for a new alternative to shoeing horses. While I didn't particularly understand the mechanics behind it, she was hoping that Gabriel would try out his method on his horses to see if the local folks would then decide to use it as well. She and Abe would be conducting a 2-day clinic with Gabriel's staff and working with the horses. 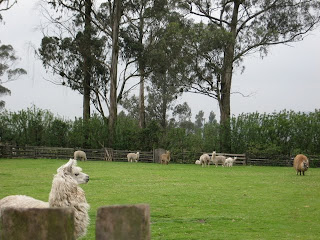 After breakfast, we met Gabriel's llama and alpacas, who were wandering around in a pasture adjacent to the stables. Jon and I walked around with them for a while and met Gabriel's cousin who was visiting for the day. Next, Gabriel put us one some horses so we could get accustomed to them for our ride later that morning. Far from being ready to take on the label of "Chagras" ourselves, I can happily say that neither Jon nor I fell off our horses the whole day! 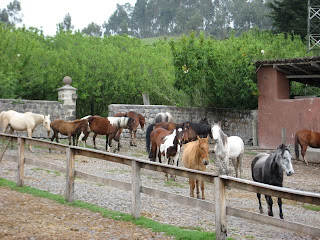 After successfully mastering walking and trotting and, with a little less luck, some galloping, a "bus" arrived from Quito with a group of tourists. They had ridden on this bus down the train tracks for a demonstration of some chagras activities. Jon and I helped by herding the alpacas and llama out of the arena. It turns out that both of us could take up alpaca herding, if our day jobs don't end up working out! We watched with the other tourists as Gabriel and his cousin lassoed a bull in some traditional chagras costumes.

Then, the fun began! Jon, Gabriel, and I mounted our horses and took to the trail to the mountains. Jon's horse, Armiga, was quite amenable to the walk, as was my horse, Copper. This was our second excursion on horseback, and also our second in South America. Gabriel led us along the railroad tracks for a while before we headed off into the foothills. It was a beautiful day for a ride as we made our way past some local residents and their dogs going about their usual business. I was surprised by all the different parcels of land even in this rural area. Gabriel explained that the US had advocated this system of small agricultural plots as some sort affront to Communism, but I wasn't exactly clear on his explanation. Still, it seemed a shame to me that property lines encroached upon the natural beauty.

Eventually, we had ridden so far up into the mountains that we were actually riding through the clouds! It was absolutely amazing to be up that high on horseback, and our horses were more than happy to take us up to about 10,000 feet with no complaint. The clouds were moving quickly, so we had some views of the nearby volcanoes, but for the most part we just enjoyed the ride. We reached a good stopping point high in the hills and gave the horses a rest as we marveled at our experience. Descending the mountains, we got caught in a bit of a hale storm, but the horses didn't seem to mind. The weather cleared as we headed down, and the sun was out by the time we got back to the hacienda. 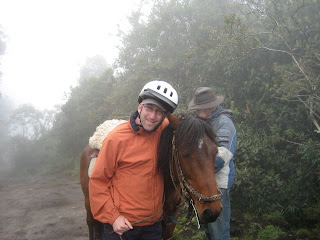 Jon and I were a bit tired from the ride, but we knew we'd never forget having the chance to ride horses in the countryside of central Ecuador. For dinner that night, Paty (Gabriel's wife) had returned from her trip to Quito and joined Gabriel, Abe, Chris, Jon and me for another nice meal. It was soon clear to Jon and me that we were out of our league in the presence of such experts on horses, so we just sat back and listened to their conversation about the day's events in Chris and Abe's class. We did get to learn that Chris and Abe had been stunt coordinators for ABC's reality show "The Mole" which I watched religiously! Initially, I thought this seemed like an interesting job, until Abe revealed that he had to test out a lot of the stunts before the contestants performed them. I'm not so sure I'd want to be the guinea pig in that particular situation.

After dinner, Gabriel wanted to show the videos from a recent ride he had done of quite some distance. I watched for a while, but Jon and I were soon overcome with fatigue and had to call it a night.