Ecuador: Day 2 - A trip to the middle of the world

Well-rested and eager to explore, we woke up and carried our bags to Mansion Del Angel: our second Quito hotel. Despite the early hour, they were able to give us access to our room so we could set down our gear and set off to see what Quito and its environs would have to offer.

I had been studying up on the trolley bus system around the new city, so we walked a few blocks to the main street. First, we decided to stop at a local bakery for some breakfast. As we were walking down the street with our Pan De Yuca, somebody threw some orange substance on our jeans! Not seeing the offending party anywhere around, some local folks at a nearby restaurant offered to help us clean off our pants. The orange liquid had gone conveniently on the back pockets of our pants. Sensing a scam, Jon and I made eye contact and then moved our wallets quickly to our front pockets. One of the men told Jon that a bird had caused the stain on our pants, but that seems unlikely. I hate to be suspicious without any true grounds for it, but after having my wallet stolen in India, I think we're both pretty careful to make sure that our valuables are protected. As usual, most of my cash, passport, and credit cards were tucked safely under my shirt in a hidden pouch. The most that would have been lost would have been about $10 and a soon-to-expire driver's license, but still it's an unpleasant event to have anything stolen.

So, perhaps a little dirtier but with undampened spirits, we took the crowded trolley bus towards the center of the city. Eventually, everybody got off and the bus turned around, which indicated that we had reached the end of the line! That was unexpected! So, we got off that bus and decided to get some better information from the helpful locals. Throughout our entire time in Ecuador, I saw very few printed bus guides which made navigating the system a little tricky. Jon used his Spanish skills to ascertain that we could take a non-trolley bus from where we were to the end of the line and then transfer to another bus up the highway to the Mitad Del Mundo (the Equator). So, paying another 25 cents each, we boarded a bus headed north. About 45 minutes later, we reached a far north bus terminus (also devoid of bus schedules or a formal information booth). Leaving the metrobus system again and going to the intercity bus area of the station, we found out that the bus we wanted was also a metrobus...costing us yet another 25 cents to get back in the system. Whoops!

Now headed in the right direction and silently cursing myself for forgetting my GPS, Jon and I arrived at the Equator! Even though it took longer than it should have, it was quite a site! There's a large monument and a nice collection of museums and shops. 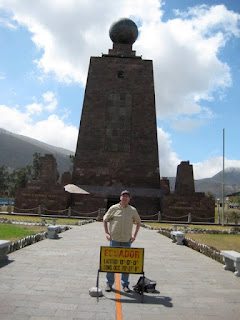 We took the standard tourist shots of straddling the imaginary line that defines quite a bit of my work. Looking down at the painted line that marks the Northern hemisphere from the Southern, Jon remarked, "Hm, I had no idea that the Equator is actually yellow!" 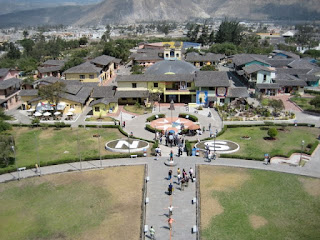 After a nice visit and a little snack, we headed back to Quito, this time via taxi in order to save some time. We got to the old city in the mid-afternoon and set about on foot to take in the stone buildings, narrow streets, and grand plazas. It's always interesting to see these venerable structures and churches in place for years, some now transformed for modern purposes like convenience stores and pharmacies. We visited the Plaza Grande and then the Plaza Del San Francisco. 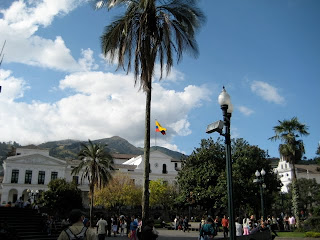 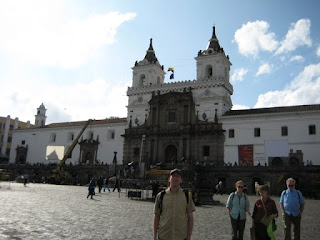 After a few blocks of walking, Jon felt a tugging on his backpack. At the next street corner, a kind woman pointed out to Jon that his bag was unzipped. Unfortunately, somebody had relieved Jon's bag of his iPhone. And on his birthday, no less! We walked the block of the offense and the surrounding area a bit, but by then the phone was gone.

As sad as it was to be robbed on one of our trips again, I think it's important to remember how lucky we've been with the sheer volume of travel that we do and how rarely things go wrong. I don't think I would trade in the experiences of seeing the amazing things we saw on our trip just to prevent the theft (probably easy for me to say since it wasn't my phone that was taken!) All that being said, the theft did briefly put a damper on our outings for the day.

A bit deflated, we caught the next trolley bus back to our hotel. We beat the afternoon rainstorm that would happen pretty much every day we were in Quito by a few minutes and rested up for a few hours. Later, Jon chose a nearby restaurant called Azuca for his birthday dinner. The live DJ and happening crowd kept things lively as we ate a pretty good meal complete with excellent mojitos: mine was traditional, but Jon's included passion fruit. The nice food and jubilant atmosphere of Plaza Foch lifted our spirits as we strolled around. Finally, ice cream cones in hand, we walked back to our hotel for the evening.