Having earned our wheels on the previous day's bus adventures, we set out confident for our next destination: Otavalo! This was to be the site of one of the largest markets of the country, and I was eager to get a look at the country outside the confines of Quito. The first thing we discovered was that our bus information from the Frommer's book mentioned the old bus terminal which has since closed. A friendly cab driver, however, set us straight and said he'd take us to the correct bus station for the 1.5-hour bus ride to Otavalo.

As we drove the polluted and crowded streets of northern Quito, I began to get alarmed by the distance to the north interprovincial bus terminal. I had no idea it would be as far as it was from the city center! Eventually, however, my fears were unfounded as the cab pulled up to a brand new bus center alive with activity even at the early hour. We thanked our driver as he wished us safe travels in Spanish.

Soon, he was yelling at us that the bus that had just passed was the one we wanted. They run every 10 minutes or so, but there was no reason to wait as we chased the bus down the street. That's when the fun began! All the seats on the bus were full, but there was a bucket up near the driver that Jon could (partially) sit on while I stood next to him. The advantage to this arrangement was that we could keep our bags within sight as the bus labored northward. Every so often, more passengers would jump on to fill the aisle of the bus, and folks selling papers and all varieties of fruit and ice cream would occasionally jump on and off. Soon, a lady was sitting on a pillow wedged against my foot. I was happy for a little stability as the bus continued, but it did make it difficult to shift my weight from one foot to another.

Leaving Quito and passing a tollbooth, an air brake system providing a screeching soundtrack coming down from Quito's high elevation, I attempted to keep from watching the clock that seemed to tick off the 90 minutes more slowly than usual. I had a great vantage point to see the vistas of the Andes out the side window. The driver spent a fair amount off this time either dialing his cell phone or texting as the vehicle careened from cliffside to cliffside. I took some comfort in thinking that he'd probably driven this route often and knew it well.

Eventually we arrived at Otavalo, hopped off, and caught a cab to Hacienda Cusin in nearby San Pablo Del Lago. What a beautiful place! The hacienda and connected monastery have a long history but were restored to their current condition in the 1990s with modern conveniences. 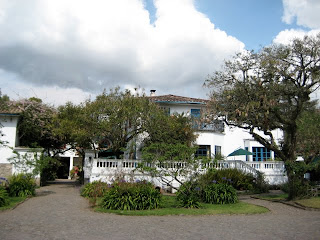 Our room was on the second floor with a little balcony overlooking a nice courtyard. Another cab ride later, we found ourselves at the Otavalo market. It's a great collection of vendors all hawking food, clothing, and everything else pretty much to all the folks walking by. My first purchases were a hat and some sun block, however.

Jon and I walked around a bit and discovered a nice runner for our coffee table which will be a nice reminder of our trip. We got some lunch in town and stopped by an ATM before taking another cab back to the hacienda. There, we walked around to explore the grounds, the stables (complete with turkeys, chickens, etc.), and the monastery where we discovered a secret passage to a small watchtower. 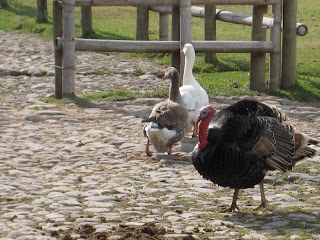 The cooling afternoon rain was a welcome break from the sunshine and gave us a chance to do some reading and relaxing. In the evening, we had a nice dinner in the hacienda's dining room with our fellow guests. It was a grand room with great service and decent food. Afterwards, we rented the movie "Ray" on DVD from the reception desk and settled into the library to watch it. One of the hotel staff even brought us some popcorn to go along with it! After an eventful day and the long movie, we enjoyed a great night's sleep.