Ecuador: Day 4 - You can't get there from here

Always on the move, Jon and I woke up, enjoyed a protein-filled breakfast and set off for a walk in the hills. We walked up the streets of San Pablo Del Lago from the hacienda which afforded us some great views of the nearby lake and some of the local residents herding their cattle...down the same streets we were on! Eventually we wound our way to the center of town and it's central plaza where we picked up some baked goods for our travels that day. 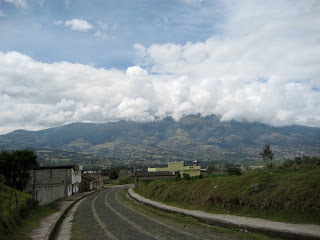 With regret, we took off from Hacienda Cusin and got a ride up to the main road where we stood waiting for our bus back to Quito. About 2 minutes later a bus slowed down enough for us to hop on and get going back south. This time we got proper seats, although not together, and had a much more comfortable ride back to the northern bus terminal. Our final destination for the day was Aloag, which is about an hour south of Quito. That meant we had to arrive at the northern bus terminal, then somehow get to the southern bus terminal before finally hopping a bus to Aloag. I thought that it would make sense to get between the bus terminals by cab as opposed to navigating the metrobus system through town with our bags, but the lowest price we could find on a cab was $12! That seemed a bit high, but some folks at the bus terminal were able to direct us to a $1 bus which would take us straight there. What luck!

Quito is built on the hillsides on the surrounding mountains, which means that many geographic barriers exist as you go from one side to the other. With the new bus terminal layout and a new airport opening in 2010, the city has built new higher-speed belt highway systems to the east. They're great, and our bus trip was very quick, but because they've been built out of necessity on the side of mountains, there are few to no straight sections! Our bus ride from North to South reminded me of a roller coaster which made eating our sandwiches and drinking our Cokes an adventure in and of itself.

We got to the south terminal and asked for tickets to Aloag. Everybody seemed to think we were crazy, but they sold us tickets to Santo Domingo which would at least take us through Aloag. Another run to a bus had us on our way south. I kept the map close by to point to if necessary and tried to keep a close eye on where we were headed, still a bit concerned with the lack of road signs that we'd end up where we wanted to go. Soon enough, however, we were in sleepy Aloag on the side of the road with every business around us closed (it was Sunday, after all, in a fairly Catholic country).

One place seemed kind of open, so we walked in to use the phone to call Hacienda La Alegria, our ultimate destination for the next few days. The two girls and their mother there spoke no English, but eventually they tried to help us call the Hacienda. We couldn't get an answer there, and I figured we'd soon have to set off on foot to get there. But the mother went to get her son, who offered very kindly to drive us to the hacienda! I feel like there's always one point in all of our trips where I'm overwhelmed with the kindness of the folks we encounter around the world. This was that moment on that trip as the son went out of his way to drive us two crazy Americans and fill in the blanks between all of our advanced planning and our ambitious travel plans "off the beaten path" to a hacienda down some random cobblestone paths deep in the Avenue of the Volcanoes. We thanked him profusely, offered him a few dollars for his trouble, and were delivered to a gorgeous hacienda adjacent to some stables.

Unfortunately the innkeeper, Gabriel, wasn't there when we arrived, but one of the workers and her children welcomed us and called him on her cell phone. He explained that he'd be there in an hour as the worker showed us to our room. One of the smaller children saw us and immediately shouted "Gringos!!" upon seeing us. Jon and I had a good laugh over that one as we had to admit that we were, indeed, Americans! 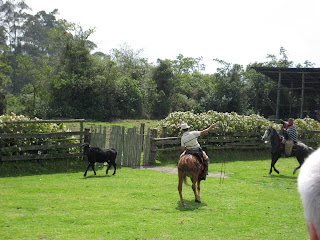 Jon and I soon came to realize that we were about to hear a lot about horses, and they seemed to be Gabriel's passion. The hacienda has been in his family for many generations but had converted a few years ago from an agricultural farm to a tourist destination in an effort to make it profitable. If it had remained a farm, there's a good chance that after it is turned over to his daughters upon Gabriel's death, it would be parceled off and sold.

We had a nice dinner with Gabriel and then settled in for bed. It had been quite a day!

The card or sheet on which the game is performed shall be a part of} a deck, group, or collection, no two of which can be alike in any given sport. “Charitable, nonprofit, or veterans’ organization” means a company which has qualified for exemption from federal revenue tax as an exempt group beneath the provisions of s. 528 of the Internal Revenue Code of 1986, as amended; which is engaged in charitable, civic, neighborhood, benevolent, spiritual, or scholastic works or other comparable activities; and which has been in existence and energetic for a interval of 3 years or extra. The fee, any state legal professional, the statewide prosecutor, or the Attorney General could apply for quick lived|a brief} or everlasting injunction restraining further violation of this part, and such injunction shall issue with out bond. No electronic or mechanical units, 카지노 사이트 except mechanical card shufflers, additionally be} used to conduct any approved sport in a cardroom.