Mexico: Day 8 - Back across the peninsula

Today we had the long drive to Cancun ahead of us. Luckily, the two cities are connected by a toll road that makes for easy driving. We did some shopping on the streets of Merida in the morning, grabbed some lunch for the road, and got back in the car. The drive was pretty uneventful, except for when we were stopped by the police after a toll booth. This search was much more thorough than the last, and we had to get out of the car as the officer searched through all of our luggage and the car. Finding nothing of interest, he sent us on our way.

As we got closer to Cancun, Jon and 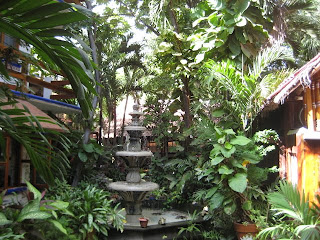 I decided to return the rental car on our way in as opposed to waiting until the next morning. The car agency was going to be closed when we arrived for our flight, and I was a bit nervous about that. Returning it was easy, and we caught a bus to downtown Cancun, as we knew our hotel was right by the bus station. 30 minutes later we were relaxing at our hotel enjoying the last bit of our vacation.

That night, we walked to a nearby restaurant for a nice meal (upscale Mexican, of course). As usual, we were almost the only folks there. It's traditional in Mexico to eat a large meal at lunch, so dinner isn't a popular time to go out to a restaurant. We checked out the Christmas decorations at city hall after dinner and then turned in early at our hotel. 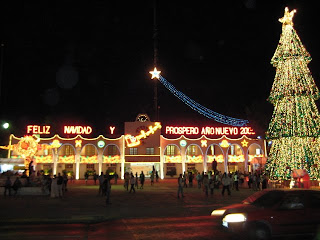 What an amazing sounding trip (and at such a great time of year)! I loved the holiday decorations in this picture! :)