Mexico: Day 7 - Back to Merida via the ruins 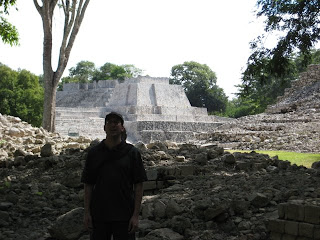 We had another ambitious day planned, so we got up and went straight to the city's wall (or at least what's left of it). Apparently, Campeche had a lot of trouble with pirate attacks back in its early days. We were able to get on the wall and walk a short distance to get a great view of the historic central area as well as some of the newer areas on the outskirts.

Our first stop after leaving the city were the ruins at Edzna. Well, our first stop was at a police checkpoint where they checked my driver's license and rental contract! Luckily, there were no complications there, and we soon found ourselves in Edzna. As this site is off the beaten path a bit, it was much less crowded than 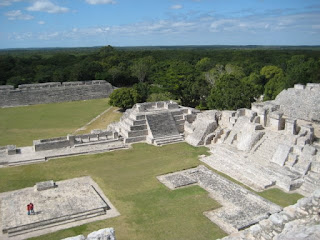 the other ruins we'd see. Edzna was historically a more agricultural settlement, which was a stark contrast to the mostly military ruins we'd seen before. Jon and I had a good time walking around and climbing on the different structures. Some of the Mayan carvings here had also been preserved, so it was fun to look at those items as well.

As soon as we left the ruins, we were ready for lunch and had a long drive to our next destination. We stopped at the first "restaurant" we saw. Guadeloupe, the owner, offered a choice of 3 different meals. We understood our meat choices to be chicken, steak, or pork, but we had no clue about the preparations she mentioned. We took our chances with the chicken, and it turned out great! It was a very nice meal in a very pleasant setting. Guadeloupe was very friendly, although our communication with her was fairly limited. Still, it was a fun experience and the kind of thing I really enjoy when I travel. 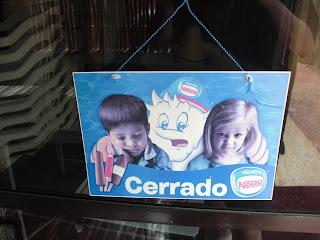 Here's the "closed" sign from the place we ate lunch. Apparently, the kids are none too pleased about the lack of ice cream!


No time for a siesta for us after lunch, though, because we had miles to go before we slept! After a nice drive through the country, we arrived a Uxmal. Unfortunately, we didn't have much time before closing to explore the ruins, but we did manage to see most of the excavated site. Uxmal was more of a social settlement, and it was interesting to compare that to what we'd seen in the agricultura 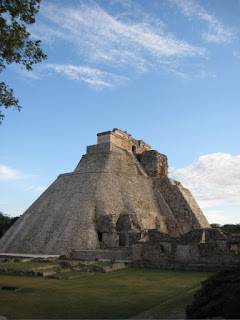 l and military ruins. Again, I found myself in awe of the sheer enormity of the stone structures.

Back on the road, it was dark before we got back into Merida. That makes the driving a bit more stressful, but again Jon's excellent directions got us back to our hotel without much trouble. We got settled in our room, this time facing the garden. After being in the car all day, we took a nice walk over to a nearby restaurant. It was upscale, and the food was excellent! The place was decorated in blue and pink, so the decor and the food were both pretty vibrant!

After dinner, we went to go hear a performance of local Yucatacan music. This performance happens every Thursday, and the one we saw was the 2206th performance. Most of the folks in the audience were tourists, and we struck up a conversation with a guy from California who was at the end of a bus tour from Mexico City. He said he'd had a great time and was sad his vacation was coming to an end. The music was great, and they even had some local teens dancing the city's traditional dance.

Here's one of the translated signs from one of the ruins. I'm pretty sure somebody mis-translated the word "alien" in here :) 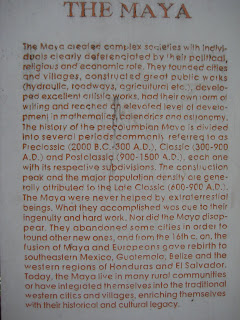