We got to an earlier-than-usual start and said good bye to our hotel in Tulum. We had a lot of driving to do, and I wanted to make sure we minimized the amount of driving after dark. The first leg of the drive was the same road we'd taken to Coba, but after that stretch the road conditions changed dramatically! The road was narrow with many potholes and large buses passing by, but I got behind another car who knew when to swerve to avoid the potholes and slow down for the topes. 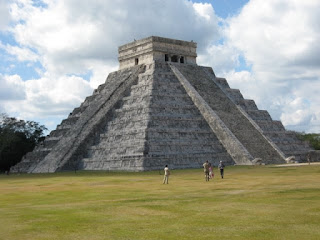 In late morning, we reached Chichen Itza. We had beaten most of the tour buses there, so it wasn't too crowded as we admired the large central pyramid and surrounding buildings. Again, the enormity of these buildings is striking: with no CAD software available, the Mayans were able to build all of this and have it last for thousands of years! 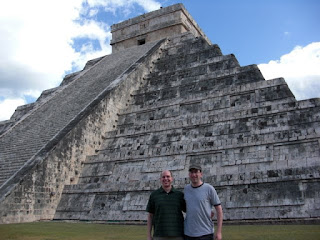 We had lunch in the nearby town of Piste and enjoyed some local specialties which were very good. I was surprised as food near large tourist sites doesn't tend to stand out. 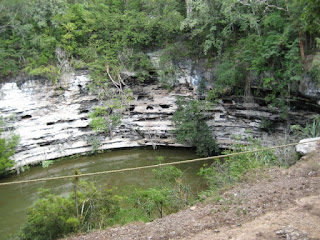 Then, it was back to the large toll road to Merida: our stop for the night. The drive to our hotel was fairly easy, and the numbered streets made it easy to find.

The B and B we were staying in was quite unusual, and the rooms are all unique with different layouts. We had reserved one of the nicer rooms for the night on the top floor with its own balcony. When we checked it, we were asked to sign a contract promising, among other things, that we wouldn't smoke anywhere in the hotel. One rather peculiar paragraph encouraged us not to think of breakfast as "included" but rather as a gift from the hotel staff that would provide us enough nourishment to have a good start to our day! Jon and I exchanged puzzled looks, but we signed anyway.

It had been a very long day, but we took advantage of the City of Merida's free cultural program after dinner and went to hear a local community band play 1940s Big Band music. The playing was ok, but the real attraction were the folks dancing. Many people were showing off their moves in the town square, and I really enjoyed watching the people dancing and enjoying themselves.

Tired from a long day, we went back to the hotel and turned in for the evening.
Posted by R-dogg at 5:16 PM