We had another long travel day planned, so we got up early and got our "gift" of breakfast at the hotel. Neither of us were able to finish the rather large portions, and as we left we both became concerned that the hotelier would require us to finish what we hadn't eaten when we got back to Merida the next night! 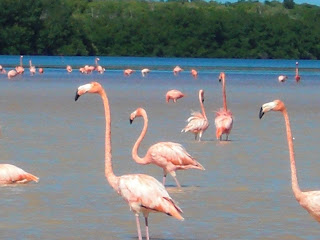 The trip to Celestun took quite a while, and we encountered more topes than we had expected along the way. We even managed to see a crew building a new one! All of the travel was worth it, though, because we took a boat out to see the flamingoes. They were hanging out eating young shrimp and crabs (which is how they get their pink color). We shared a boat with a tourist from France, and the boat driver only spoke Spanish, so we had an interesting time communicating. The tour included a walk through the mangrove trees in the area which gave us a chance to spot some other local wildlife. 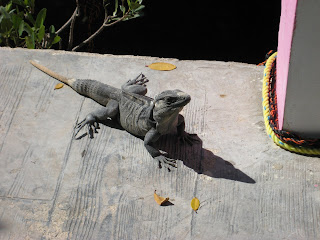 Next we headed into town for a nice seafood lunch. Unfortunately, the gas station marked on my map in Celestun didn't really exist, but we had just enough left in the Attitude's tank to reach the next closest one.

We drove down to Campeche and got there just in time to see the great sunset over the water. Afterwards, we walked through the walled city to a restaurant where we enjoyed some Mexican food and watched some children play in the public square. The main plaza was decorated for Christmas, so we stopped on our walk back to the hotel to check it out. 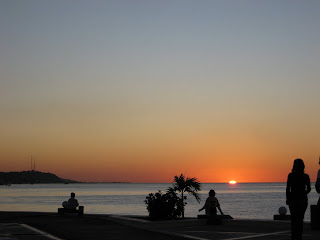 Wow! That's what flamingos sound like?!?!?! All these years I've loved them, never realized how annoying a bunch together would sound! How cool to just cruise by on a boat though!