At shortly before 6am, our flight landed in Seoul.  We were a bit tired having only had about 3 hours of sleep, but if the choice was sitting around the airport for 12 hours or hitting the streets, why not keep the adventure going?  Jon and I stored our bags at the airport and grabbed the train into town.  It was a smooth ride, if a little long, but we made our transfer to the city subway at the university station and continued on into Seoul.
Our first stop was a Dunkin Donuts to get some caffeine before we walked the streets of Insa-dong (a trendy area not too far from the city center).  Since it was early on a Sunday morning, the streets were mostly quiet and not many of the businesses were open yet.  Still, it was fun to do some window-shopping and take in some nice views from the mountains surrounding the city.  At the end of the street, we noticed that we weren’t too far from Gyeonbokgung Palace and headed in that direction. 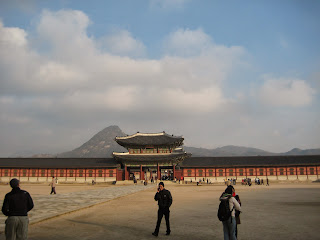 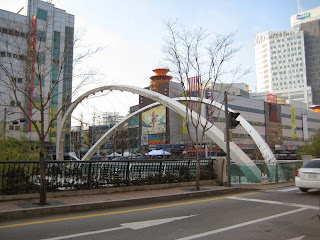 The weather was much cooler than the tropical weather we were used it (it was above freezing, but not by much), so we didn’t spend too much time strolling the outdoor grounds.  We managed to snap a few photos before retreating back underground to go to Dongdaemun Market.  Again, not too much was shaking there, but had we been in the market for some knock-off designer gear, this would have been the perfect place to find it!  Nearby, the city is renovating an area as a gathering space/cultural center.  The design reminded me a bit of Millennium Park in Chicago, and it looks like it’s coming along nicely.
Another subway whisked us over to an upscale shopping area.  Ready for lunch, we looked around for something Korean that might fit the bill.  We found a nice lady on the street who pointed us towards a restaurant a few doors down, and we went in only to find a menu entirely in Korean!  The waitress didn’t speak English, but some other diners did some translating for us.  We ended up ordering some beef Korean barbecue and waited to see what would arrive.  What we got was fantastic: there were thin strips of beef that the waitress grilled right at our table combined with a green salad, kimchee, a macaroni salad, and large lettuce leaves to wrap the beef in.  There was also red pepper paste and fish sauce to go along with it.  It turned out to be a lot of food, but we had no trouble making short work of it. 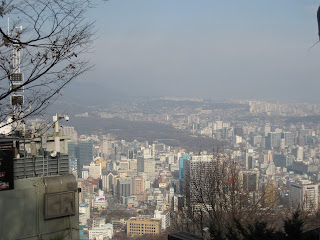 We ventured out yet again in search of the Namsan cable car.  After an initial wrong turn, we found the terminal, bought tickets, and were soon being taken up the mountain.  The view of Seoul from here was fantastic, and it was neat to see it unfold as we rose.  At the top we took an elevator ride up to the top of the N-Seoul tower.  It reminded us a bit of the Space Needle, so it was a nice transition back to our regular life in the US.

Here, Jon and I gather some information for our pilot from the N-Seoul Tower as to how to get back to Seattle from Seoul: 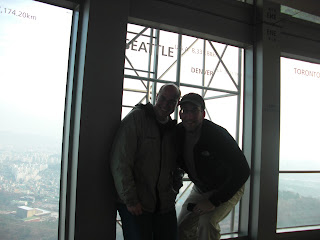 Back down the mountain we went and zipped back over to Seoul Station.  Jon wanted to buy some red pepper paste to bring home, so we ducked into a superstore.  I had no idea how we’d find it, not knowing Korean, but luckily the store had a whole section devoted to it!  After a bit of debate as to whether that counted as a liquid or gel, Jon bought it in the hopes that there’d be no questions.
We took the train back to the airport.  The weather was clear enough now to see the new Incheon Bridge from the train, so that was neat to see.  It would have been great, had we had a little more time, to check it out up close.  We retrieved our bags and got through security before taking advantage of the airport’s free shower facilities (much to the relief of our fellow passengers).

10 hours or so later, we were on the ground back in Seattle.  This wound up being quite a vacation with a variety of different locations to enjoy.  As amazing as it was, it felt good to be back home!

Free shower facilities in an international airport. Now that's how to run a civilization!

I LOVE reading about your travels. Thanks for sharing!