Another early flight had us cabbing it to the airport early yet again.  This time, we were off to Siem Reap, Cambodia as an extension of our trip.  Initially this had not been in our plans, but the proximity of Angkor Wat to us meant we could not pass up a chance to hop across the border.
The Angkor Air hour-long hop was very pleasant, and we landed at Siem Reap to discover an airport similar to the open-air feeling I remember from landing at Kona in Hawaii not too long ago.  We bought our visas, got our fingerprints taken at passport control, and proceeded to Customs.  Here, there were no attendants but rather a pile of declaration cards that previous passengers had dropped on their way through.  We looked around for a few minutes, but seeing nobody, we added ours to the pile and zipped out to a cab! 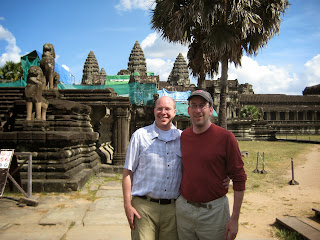 A friendly driver took us to Viroth’s Hotel while we took in our first glimpse of Siem Reap.  Being in the jungle, the vegetation is much more lush and the streets much less crowded.  After settling in, we walked over to the town center for some lunch at a place called the Blue Pumpkin.  Finally, I had an actual sandwich with bread and everything!  The French influence is stronger in Cambodia than it is in Vietnam, so apparently that means much more bread.  Our meal was great, but we were anxious to get up to Angkor Wat, so we grabbed a tuk-tuk and made our way through the admissions booth and on to the temple grounds.
My first impression was “Wow!”, and it reminded me of the first moment I had laid eyes on the Taj Mahal during our India trip.  The sheer size of the stone structure is enough to grab your attention as you stroll across the moat and into the long courtyard leading up to the temple.  There are bas-reliefs on almost every surface depicting the history of the 12th century society that built the sacred structure, and climbing in and around and on and through and up all the corridors and spires gives you a sense of the great history here.  How fortunate that the stone has held up through the years for us to see and explore! 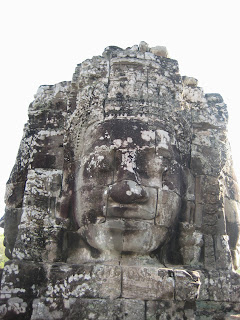 From the temple, we walked the 3 km up to Angkor Thom (the city that lies just north of the temple).  We passed the south gate and several groups of monkeys as we made our way up the dusty road.  The Bayon was our next stop.  This structure has more elaborate stone carvings that depicted the daily life and struggles of the people who built it.  Most of it is still intact, so the walk through is a constant battle to determine just what to photograph!  There are so many elaborate places to look.  Just north of that are two platforms, the Platform of the Elephant and the Platform of the Leper King, which were used by royalty to watch performances on the expansive lawn out front.  Jon and I walked along here but opted to take a tuk-tuk back to Angkor Wat for sunset.
Unfortunately, clouds prevented us from getting a particularly dramatic shift in the light by the temple as the sun went down, but we stuck around and took many photos.  Another tuk-tuk took us back to the hotel.  After 5 hours of walking around and exploring, we were exhausted! 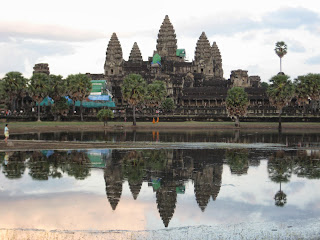 That evening, we walked to a nearby restaurant owned by the same people as our hotel for some traditional Cambodian food.  The taste is a bit milder than what we were used to from Vietnam, but it still had a distinct flavor that I liked.  We strolled into town to watch the nightlife unfold.  Vietnam is very much an early-to-bed-early-to-rise country, but the tourist trade in Siem Reap means that the bars and restaurants stay open well into the evening.  Tons of folks were still milling around and enjoying Pub Street as we bid them all good night to return to our hotel for some rest.
Posted by R-dogg at 7:05 PM

What an amazing place! I hope to go some day too. I'll have to call you for tips if that ever happens.