Turkey: Day 5-Out of the City, Into the Country

After our great experiences in Istanbul, we were ready to see what other parts of Turkey had to offer. Our flight to Dalaman on the southern coast went smoothly on Turkish Airlines, and soon we were breathing in the warmer, cleaner air and piling on to a shuttle bus to Fethiye.

Fethiye was going to be our "base camp", and it's a very nice seaside town. Tourism appears to be one of (if not the only) industries there, so there are quite a few taxi drivers and tour arrangers who were quite happy we were in town! 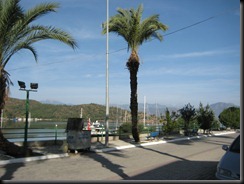 Winter is definitely the off-season there, although we had quite nice, warm weather during our stay. We stopped in town for some breakfast before trudging out to our hotel. The new bus station in town where we arrived is quite a ways from downtown, and our hotel was on the extreme other end of town. It was certainly a hike! We were also greeted by an unexpected "Hi, how are you guys doing?" from the only other American tourist in Fethiye during the off-season on our journey.
Villa Daffodil is an old property that has been carefully restored and was quite a relaxing place. I suspect there were maybe 2 or 3 other guests while we were in town so it felt like we had the whole place to ourselves. After settling in and ditching our luggage, we walked back into town for our only sightseeing event of the day. We had lunch on a rooftop terrace overlooking the water before visiting the local tourism office where the rather unhelpful attendant gave us a map and sent us on our way. 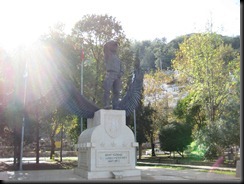 Never wanting to miss out on an opportunity to try out some local transportation, we passed up all the car rental offices and waited with some other village folks who were flagging down dolmuses (vans) on the side of the road. We had some trouble finding one headed our way, so eventually we ended up at the minibus station where we were pointed in the direction of the right van. Soon we were on our way to Kayakoy in the hills above Fethiye.

This was when we first encountered the truly touristy nature of the region. Our van passed through what was essentially a ghost town in the off-season of hotels, restaurants, and shops devoted to the tourist trade. They offered "British food service" and other tourist creature comforts. I'm all for visiting resorts and tourist sites, but I was glad to be seeing this in the off-season where we could avoid most of the crowds.

Soon, we were in Kayakoy. Initially a Greek village, it was abandoned when the Turkish folks settled it in favor of a location at the bottom of the hill where the initial stone village was founded. 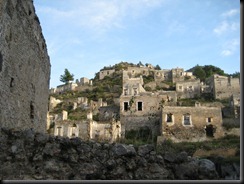 There was an eerie sense to the place as we climbed up the steep hillside to admire all the structures. 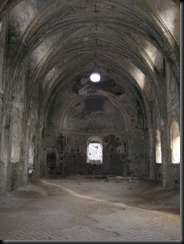 The church was especially interesting since quite a bit of work had gone into its planning and construction.

As night began to fall and we'd explored some more of the ruins, we took a seat by the side of the road to await our van ride back to town. We grabbed a quick dinner when we returned to Fethiye and went back to Villa Daffodil to watch The Amazing Race on the Slingbox before turning in. 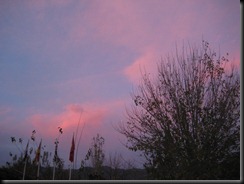 I love traveling in a location's off-season, too...so nice not having to battle crowds or even see anyone, really.