Turkey: Day 4–Hopping over to Asia

Today was our last full day in Istanbul, and since we had lined up many activities the first few days, it felt great to have a day where we could explore a bit with no set agenda. Our first order of business was to locate a coffee shop recommended by the staff at the Ritz, but an hour and a half of searching later had left us sans coffee and ready to try something else. So, we grabbed a quick breakfast down by the waterfront before boarding a ferry for the Asian side of Istanbul.

The ferry ride was very pleasant: about 20 minutes over fairly calm water and then we were technically on another continent! 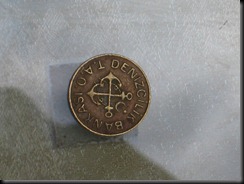 My map did not cover this area, so we set off on foot to navigate to Ciya: a restaurant we had heard good things about. The biggest problem with this plan was that I had left the directions in my bag back at the Ritz. After exploring a big, we ducked into an Internet cafe to get some better directions.

Lunch at Ciya was fantastic and well worth the difficult navigating. They have many different dishes that are being offered on any given day, and you just point to the ones you want to try. We ended choosing way more food than we needed, but it's always nice to give as many things a try as possible. The weather was lovely, so Jon and I took a stroll along the waterfront. 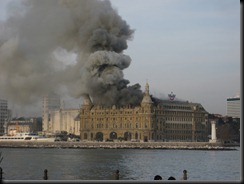 Unfortunately, we were witness to an old train station that had caught fire during our walk! It was abandoned, and nobody was hurt, but it was such a beautiful building that it was quite sad to see it being destroyed.

A ferry ride later we were back in Europe checking out the waterfront. We took another walk through the spice market, sampling some cheese and olives before finally settling in to a cafe for some tea. After a while, the power went out (taking with it our Wi-Fi connections), so we went down to the bridge to admire the city at night. Jon grabbed one of the fish sandwiches being sold straight from the fishing boat, and then we grabbed our bags from the Ritz.

Since we had an early flight to catch the next morning, we decided to stay near the airport. So, we grabbed a tram through the old city to an area where you can connect to the subway. There wasn't much planning involved with how one might do this, so it was quite a walk from the tram stop over to the Metro entrance, but we were soon zipping out towards the airport! We got off the stop before the airport terminal which appears to exclusively serve the hotel we were staying in, so it was an easy walk over for some much needed rest.

I am relieved to see that meal-planning plays as much a role in your tourist life as it does in your hosting life. ;) And by that, I mean Jon's.