The day started off relatively early as Jon and I, awakened by the 6am call to prayer, enjoyed breakfast at the hotel's top floor restaurant. We finally got our first view of the city in broad daylight and were eager to hit the pavement and start exploring.
In order to get our bearings a bit, we took off on foot. First, we rode the funicular from the top of one of the hills down to the waterfront where we then walked across the city's "new" bridge towards the major tourist attractions. It was still a bit early in the day, so I was free to indulge my tourist impulses to stare wide-eyed at all the amazing architecture and take a few photos of the sprawling city around us. The first stop of the day was the Hagia Sofia: an ancient structure dating back to the Byzantine days and notable for its sheer enormity. 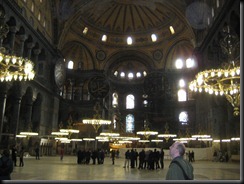 The outside is fairly unassuming, but the interior was immense and gorgeous. Some of the ancient artistic works 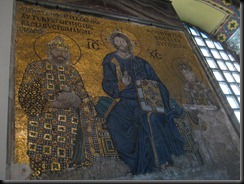 still remain intact, but for the most part visitors are required to use their imagination to determine how things looked back in its heyday.

Just across a courtyard was our next stop: the Blue Mosque. Still in use today, it is decorated with many blue tiles which cast a hue over the entire place. The interior is beautiful enough, but the outside is also decorated with 6 minarets which are also quite a sight! 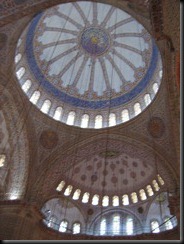 We also decided to check out the ancient cisterns situated underground near the Blue Mosque. Initially, we were hesitant to spend the money on yet another site, but we were rewarded by a fantastic, immense trip below the surface. 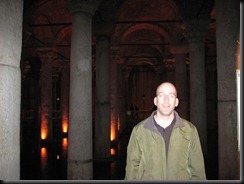 Our next stop on our crash course in Istanbul's significant sights was Topkapi Palace. Overlooking the water with clear views over to the Asian side of Istanbul, the palace holds many artifacts from ancient times, including ceremonial thrones and jewelry. It is quite a collection! 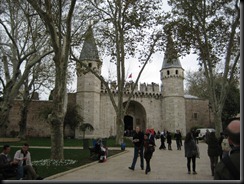 After lunch, we headed over to the Grand Bazaar. It was nothing like I expected: these days it feels similar to a large shopping mall with clear aisles and many types of shops. Neither Jon nor I are big shoppers, so aside from admiring its sheer size (it is all enclosed), we did not spend too much time there. Our next stop was the spice market where many vendors were selling cheese, olives, and meats in addition to giant barrels of spices. It was quite a sight!

We then went back to the hotel for a little rest after a long day of sightseeing. In the evening, we ventured out for dinner at a small place we found on one of the crowded streets nearby. Exhausted but well versed in the major sights of Istanbul, we called it a night!

Injection Molding is a producing process for producing parts in giant quantity. It is most usually utilized in mass-production processes the place the same half is being created 1000's and even hundreds of thousands of instances in succession. To begin the Shower Slippers with Holes method, uncooked pellets of the chosen thermoplastics are fed into the hopper on the top of the machine. As the screw turns, these pellets are fed progressively into the barrel of the machine.