Our plan for the day was to go up north of the city to a Dali museum. We had both read good things about it, and I was excited to see a bit more of Spain beyond Barcelona. Unfortunately, the museum is closed on Mondays, so it will just have to wait until my next trip back! 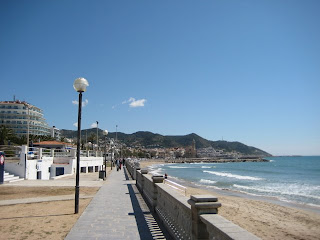 Instead, we took a train south to the seaside town of Sitges. The mood was very relaxed here as we strolled along the beach and had lunch. The weather was a bit too cool to hang out at the beach, but it was still pleasant.

Once we were back in Barcelona, we took a funicular up to Montjuic park on the south end of the city. We strolled through the botanical gardens and checked out the Olympic stadium. By the Olympic Plaza, there is a large communication tower from the 1992 Olympic Games, which was kind of neat to see. 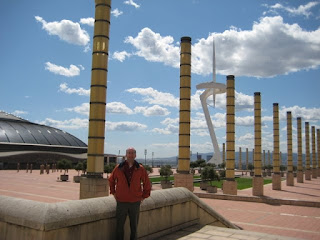 The plan for getting back to the hotel was to take a cable car, but high winds meant we were stuck hunting for a cab instead. This turned out to be a difficult search, as many student drivers in Barcelona practice driving around this park. These student drivers were all driving yellow cars (similar to the taxis), but eventually we found a taxi to drive us down. I thought it might be fun to ask one of the student drivers for a ride, I wasn't sure if they'd know the location of our hotel.

Instead of trying out a new place for dinner (and perhaps for the first time ever in our travels), we opted to go back to the same tapas bar we had enjoyed so much on Friday. Luckily, it was just as fantastic the second time around! After that, we called it a night since we were flying out the next morning.
Posted by R-dogg at 2:08 PM