Barcelona: Day 2 - Back In Europe

We landed a bit later in the morning than scheduled in Barcelona and hit the ground running. We had read about a bus that ran from the airport to the city, but we decided to take the train instead. That way, we could easily connect to the subway and end up just a few blocks from our hotel. 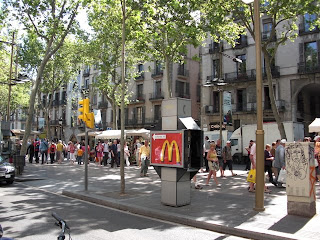 So, we took the train a few stops to the Sants station where we wandered over to the subway tunnels. It ended up being quite a walk to the subway platform underground because of the location of the different train lines! Still, the signs were helpful and we eventually emerged at the end of La Rambla (the main shopping street) by the coast.

Our hotel was situated at the end of a long pier, as I suspect it's set up mostly to accommodate cruise passengers. Walking down the pier was nice (it's landscaped as a park with a large cable car tower in the center)...the first time. Eventually it became a bit of a chore! Still, it was very pleasant to be down by the water. 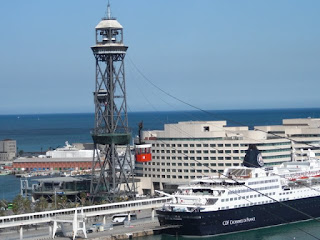 We checked in, set our stuff down, rested for a little while, and then headed back out in search of lunch. The nearby market was our first stop, with its large hams and salted fish swinging from every booth, but we ended up at a small restaurant nearby. The food was OK, and the setting was interesting: it seemed to be a neighborhood place where locals came to hang out for a few hours. We were easily the only ones there under 50! 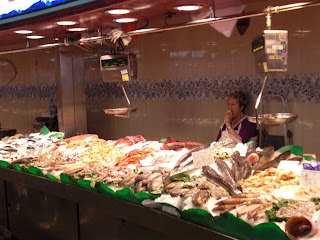 Our next venture out was that evening for dinner (we both indulged our jet-lag with an afternoon nap). Jon and I aimed for a tapas bar in the Eixample neighborhood. Armed with a subway map and the 3 maps I'd purchased at Metsker Maps before leaving the states, we found the place with no problem. We got off the subway a bit south of where we wanted to be so we could enjoy a walk through a different part of the city from where we were staying. Dinner turned out to be a great experience with friendly staff, a nice festive setting, and fantastic food.

Stuffed and ready to get some rest, we walked to a different subway stop. Because of subway construction, we had to take a bit of a detour, which is when we ran into a large group of rollerbladers. There had to be at least 100 of them! I was tempted to join them, but I had left my blades back at the hotel. 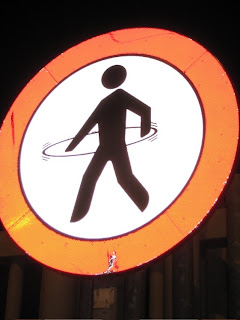 At right: clearly I'm violating this sign for a mandatory hula hoop zone near our hotel.
Posted by R-dogg at 2:06 PM