Today we took it easy. Our ultimate goal was to drive down to Tulum, but since this was our only real day in Cancun, we headed for the beach! Cancun has a narrow strip of land jutting out towards the Caribbean Sea, and every inch of it is covered with hotels, shops and restaurants. Not being beach people, we wouldn't have chosen to spend our vacation out there, but it was nice to see. It feels a lot like the Vegas strip in this Hotel Zone with all the giant hotels in one place. 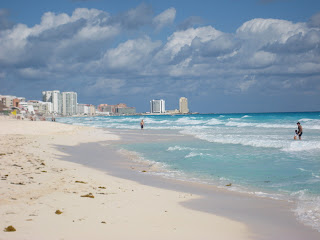 We parked the car, put on some sunblock, and ventured over to one of the public beach accesses. It was very warm (probably in the high 80s), so it felt nice to stroll along the beach for a while, checking out the light blue water.

Our drive to Tulum was about 130 km, and the road down the coast was in pretty good condition. We encountered many speed bumps (topes) along the way, as we'd read about before we left. I guess I just wasn't expecting there to be so many of them! After a while, I had decided to count all the ones we went over and then surprise Jon with the number when we returned the rental car. I realized after I got to about 52 on day 2 that I'd rather not think about how many there were and stopped counting :)

We got to Tulum in the afternoon and had lunch at a taco stand along the main drag in town. As we were examining the place, a couple of American vouched for the good food. They were from Anchorage and were spending a week on the beach trying to soak up as much sun as possible. Not a bad idea!

The next stop was our hotel for the next three nights: Don Diego de la Selva. It was just outside of town, so it would be a bit quieter and a nice place to get into the vacation mindset. It is run by people from France, so I was able to speak to the receptionist in 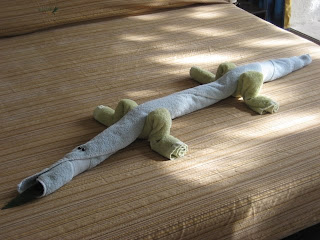 French, as I know more of that than I do of Spanish. The room was very nice, and we even had our own hammock out on the porch.

That evening, we walked into town for margaritas at one of the local restaurants. They were very good but probably a little stronger than we had anticipated! We stumbled back to the hotel a short while later and had a great meal at the restaurant there. We read a bit after dinner and settled in for our few days in Tulum.
Posted by R-dogg at 5:02 PM